A community based project to bring good return to investors, work and publicity for tradies and affordable rental for deserving tenants.

“We wanted to do something for a deserving tenant who, through no fault of her own, had fallen on hard times”

Home Sweet Home comes from an original idea by an investor who believed she could do some good in the community.

It’s not based on charity but a willingness and the capacity to do some good to deserving people who, through no fault of their own, find themselves in a less than ideal situation as far as living conditions go.

In November 2012 she attended an auction, fully intending to purchase Lot 7, which was a partly done up but old house in Labrador, Queensland. The auction was proceeding slowly and the auctioneer was having a hard time extracting good offers from the buyers.

A quick look at the property on a smart phone and a little background research on the fly revealed that the house could be good if bought at the right price. It was a Mortgagee in Possession sale which meant that it had to be sold.

The buyer engaged to purchase Lot 7 suggested a bid be placed and the property was acquired at considerably less than what would be considered normal.

And so the idea was formed. With the opportunity to buy in a soft market, one could turn a good profit on the rental market. But what if the investor decided, instead of capitalising on the opportunity for a pecuniary reward, to do good for others instead.  After all, there would be capital gain later on.

We knew of a great lady whose personal circumstances meant that she would never be able to own her own home again and was currently at the whim of landlords who demanded top rental rates. Nothing wrong with that, but it did make life a little difficult and uncertain for her.

She was invited to have a look at the house and when offered a decent long term rental at considerably below current rates was delighted.

Then a further idea struck us. What if the house had a major renovation with the help of trades people who were a little light on work and manufacturers who were happy to support the project free or at cost?  We could offer some publicity to both to make it worthwhile.

So, on Dec 3rd 2012, we began work on a complete renovation of the property. We approached a number of contacts we had in B.N.I. HUB Chapter and local trades people and many came on board. Working bees were organised for gardening, painting, cleaning etc. and by Jan 23, only 6 weeks after taking possession the job was complete.

In that time and with the professionalism of so many people and organisations (listed on the sponsors gallery) the following work had been carried out:

Complete render of the exterior of the property taking it from red brick to smooth cream by Jason Mills of The Mibin Group.

Lots of work, lots of fun and a few headaches, but well worth it.

This project started on December 3rd 2012 when the owners took possesion of the property in Jamieson Drive Parkwood. This 3 bed 2 bathroom, double garage house is about 20 years old and a little tired. It was a red brick house on a zero lot line with overgrown gardens at the rear. The interior was painted in a mustard colour and there were 4 different tiles laid throughout the house. The living area had yellow walls, grey carpet and brown curtains.

There was a rusting air-con just outside the living area on the rather hotchpotch patio area which wrapped around 3 walls. The patio had been jerry built but of solid materials. The roof on the patio was made of different profile tin and had no guttering. 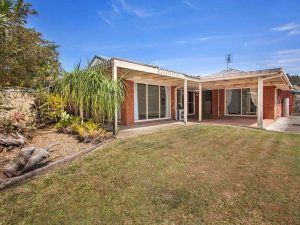 The house before any work was done

Merle, an acquaintance of the Owners, was shown the property and was keen to move in. The Owners said that they would put fans in the bedrooms and potter around in the garden until she was ready to move in.

The Owners got started on the renovation plans. Within a week the house was a real mess. The kitchen and bathrooms had been removed, the outside had been rendered, the patio painted and the gardens cleared.

By week 4 we had redesigned the landscaping,  planted most of the gardens and started on the tiling of the bathrooms and interior painting. We also began to lay a new deck. At week 5 we had completed the deck and white washed it and the kitchen and bathrooms were being reconstructed. Many trips to the dump by Chris Farrow had kept the site clean and easy to work on.

All the while Arundel Electrical and Minor Works had been on hand to make sure everything was done well. 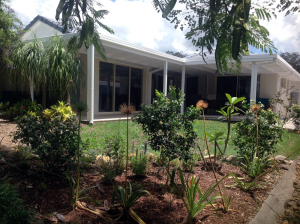 What it looked like after the renovation. A beautiful home for a deserving tenant

End of week 6 it was just the finishing touches by which time more than 30 tradespeople had been involved.

And finally on Jan 24 2013 we brought Merle back blind folded to reveal what had been done for her. She was welcomed by all the builders, locals and friends who had helped put together a real life ‘backyard blitz’ for a morning tea celebration.  She would have the opportunity to live in the house, which by now would fetch $420 – $450 per week for much less than that.

The Owners believe that a good tenant deserves a great rate. 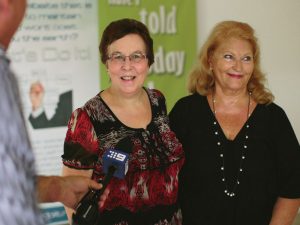